Every once in a while a grown man can receive a gizmo for Christmas that causes such temporal regression as to induce the drug-free jabbering overload of a sugar-addled boy unwrapping a new toy. This year Santa outdid himself when he delivered Trace “The Action Sports Tracker”. http://www.traceup.com/.

Simply put, Trace geo tags and records your skiing, snowboarding or surfing activity. Data is organized so you can compare your own stats with other Trace users and your friends. In a nutshell it adds a game layer to your day on the slopes, which pushes you to do more, and lets you know (in no uncertain terms) just who is king of the hill.

For the skier/snowboarder the following activity is tracked:

Before I continue, I want to shine a light on some possible points of confusion when it comes to talking about Trace software and the tracker: 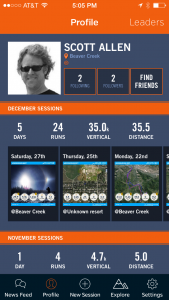 The first question users of Alpine Replay may have (aside from being curious about the name change, which we speculate is because the tracker can be used for surfing too) is why do I need to use an external tracker if my phone has been handling all these things just fine? Simply put, a device dedicated to a singular task can perform that task much better than a device that has to multifunction. How long did it take printer companies to turn out a multifunction printer, fax, copier, scanner that didn’t suck? Wait, have they done that yet? Questionable. Anyway…

Having used the Trace iOS application (without the tracker) for nearly 30 days of snowboarding last season, I can tell you that Trace Snow (iOS) is hell on your phone’s battery. That’s not a criticism. Its just a fact. Compound what Trace is doing keeping up with your antics on the mountain along with frigid temperatures, and the demands placed on your iPhone by everything else it does, it’s no wonder you can’t ride for a day unless you’re rockin’ some sort of external battery pack like a Mophie. (I used to say, don’t leave home without your lawyer or your accountant. Today, add a Mophie to that list— but I digress.)

Enter the Trace tracker. It’s a puck, about the size of a man’s watch face, (pictured above). It replaces the need to use your iPhone to track ski runs. When its lights are blinking blue, the tracker has acquired GPS and it’s ready to slide, ride or ski…. or even surf. (I can’t speak to the surfing features of the tracker. I’ll leave that to my beachin’ brethren:  Trace Surf ). When you are ready to post your killer hops, you fire up Trace Sync (the companion software for your phone), and download the data from the tracker. Rather than fiddling with your phone to get things rolling, which can be a harrowing experience high on the lift, you just turn on the tracker.

Battery life.
After a full charge, the tracker is rated for about 7 hours. When I first turned it on (see image to the right), Trace Sync showed the puck had a good 10 hours of battery life. We did not 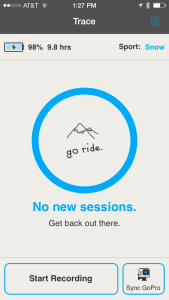 rigorously test battery life. However, having used the tracker all day yesterday at Beaver Creek, Colorado, only about 1/2 the battery was depleted. (well, it wasn’t exactly “on” when I was drinking over-priced Veuve out at the fire pit.) Regardless,  a typical day on the mountain starts when the lifts open.  Ends when the lifts close: 9am till 4pm, or about 7 hours. If you are a super freak and ski for 7 hours a day, then well, more power to ya. We’ll fully test the batteries at Vail over New Years week. (Stay tuned).

Let’s talk about setup.
First, if you already have Trace running on your phone, the tracker works with your existing account. Inside the box containing the tracker, you’ll also find a USB cord, and two 3M mounts. On our first day with the tracker we didn’t use the mounts. I remain totally freaked about losing the tracer. I may have to get over that if I want clean data. (the jury is still out on that one).

The first part of setting up the tracker is getting it paired with your phone. To do this you are instructed to visit www.traceup.com/setup using your iPhone or Android device. This is very important. When you do this, you’ll download the Trace Sync application. This is the application that you will use to slurp session data from the tracker into your phone. The sync application connects to your Trace Snow application. (NOTE: You’ll need your Trace Snow login credentials.) Once the application is installed, it will walk you through the process of pairing your phone with the tracker. During this process you will be provided brief instructions on how to use the tracker. You’ll also be shown how to mount the tracker to your board or skis. At the end of this process you will tell the tracker which sport you will be using it for: surfing or “on the slopes.” If you have enough leisure time to hit the slopes and the waves—you freak! you can change sport selection later.  Below are some screen shots taken during the paring / installation process. 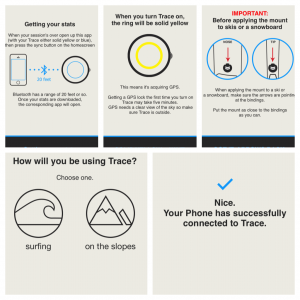 Conclusion:
Trace performs as promised. Even though, when you park your crap outside, you can easily slide the tracker from its Trace Mount, mounting this $200 device to my snowboard freaks me out. I pussed out and rode the weekend with the tracker in my pocket. Did this garble my data? Me thinks yes. Further investigation of this is needed.  Aside from that, I love the fact that I don’t have to screw with my phone, and I can get a day’s worth of riding recorded without torching my iPhone’s battery. The tracker is sturdy and well constructed. We’ll have to see how it stands up over a season of skiing. Instructions were easy to follow, and had the much-appreciated simplicity of an Apple product. I was confused by the “Start Recording” button that appears at the bottom of Trace Sync. I thought I needed to hit that to start recording, because I (like most people) failed to RTFM (ps. there is no manual). I’m still not clear on how I select the session photo before the session is uploaded. Overall, digging it. We’ll keep beating the snot out of Trace.

We invoke the call that kicks off a glorious day on the slopes “Trace ON!”

Trace on, my friends. Trace on.

Bad Behavior has blocked 556 access attempts in the last 7 days.