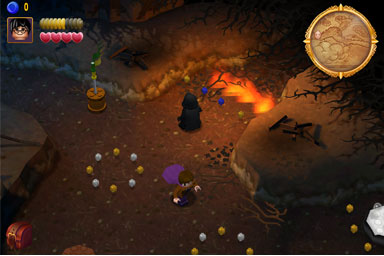 For the past few months I’ve been living and working abroad. Basically hotel hopping between Philly, Dusseldorf and Kiev. It’s sort of like living like a monk. Except for the booze. The late night dinners. And the strippers. But beyond that, there has been time to explore a few games on the iPhone. Here’s what’s been cooking my battery lately: This game is super fun. I’m totally embarrassed to admit it. I’m not exactly playing with Legos any more. (not since I turned 40 anyway). So what works so well here? The premise is that you navigate Harry through level-after-level of Hogwarts and its surrounds as solve one challenge after another. Sometimes you do this alone. Sometimes with your compatriots.  Mix potions, learn spells, find a missing key, feed the Hippogriff without pissing it off, defeat Boggarts. The entire layout is built out of Legos. Everything. From the start, the renderings are beautiful and the sound effects are fantastic. Aside from following the “story” you can also unlock levels and get into free play–which I did not do–the story was enough for me. When you execute a spell you have to draw that spell’s particular shape on your screen. The puzzles in the game are not that challenging. But they are fun enough for the casual adventure gammer.  The game kept me coming back for more. What I really like is that I can consume this game a level at a time, and a level doesn’t take very long to get through. So sitting waiting for a flight, I can finish a level and a beer.  The nice thing is that there are LOTS of levels. Lots of scenes, lots of scenarios, lots of variety. It’s an amazing amount of entertainment for just 4.99. I was actually a little sad when I finished this game, 11 hrs 32 minutes after starting it. I stumbled across a Facebook wall posting from a friend the other day. She mentioned that she had been up all night long playing this game. I was immediately intrigued. Gladly my masochism was well rewarded. There is something strangely addicting about this game. The screen scrolls to the left while you navigate your jetpack buddy further and further into this…what….tunnel? You are rated for how many meters you get in. How many coins you pick up, at lot of other stuff. Level up by near missing missiles, or using your gravity suit to change from ceiling to floor 30 times in a single game. There are lots of meta challenges in this game. Then there is the chance to win more stuff by playing the slot machine at the end of a game (if you picked up a Free Spin coin). Visit The Stash to use your fake winnings to buy clothing, jetpacks, vehicle upgrades and yes…even a pair of Air Barrys. Arcade-style game. Fun and funny to play. Ever since my Atari days i’ve loved tank games. I still have an original full-size Battlezone arcade game sitting in my storage locker. I don’t know what it is about tank games. I sure as hell wouldn’t want to be in a tank in a real war. Spam in a can. However. Virtual tanks turn my turrets. In Tank Hero you navigate your tank through levels an enemies that get progressively harder. This is a top-down 3/4 view of the play field. You steer the tank with your left thumb and aim and shoot with the right. It takes a little dexterity to get your guns pointed in the right place, but not much. Very fun. The explosions sound real. This is not a simulator. It’s an arcade-style game that’s hard to put down. Die red tank die!!! Oh my god, this is a dangerous game for your–iPhone. If you like flight simulators, and WWII, this is the game for you. Total fun. Fly all sorts of aircraft as you dogfight, protect bases, capture the flag and just try to survive the skies over Hawaii, the Pacific, Europe and more. Control a variety of aircraft through the phone’s accelerometer. Banking, pulling up is all done by moving the phone around. I’m thinking of putting out a video that turns this into a calisthenics class. “Strengthen your core with StormRaiders!” Seriously, you’ll find yourself gyrating like a mental patient as you play grab ass with your enemy, get in behind and hose him down. Or he helps you “buy the farm.” Either way, game play is great. Bullets splash in the water. Lot’s of different games, single play and death match-style games as well.

I think Mashable turned me onto this… I hate them for it. No, just kidding. This is NOT a game you can play in public. People will think you’ve lost your mind. Also, as you’re trying to catch that bastard that just cracked your windshield, try NOT hitting the lock button at the top of your phone. And…do not play this game while seated on the can. Kerplunk!!