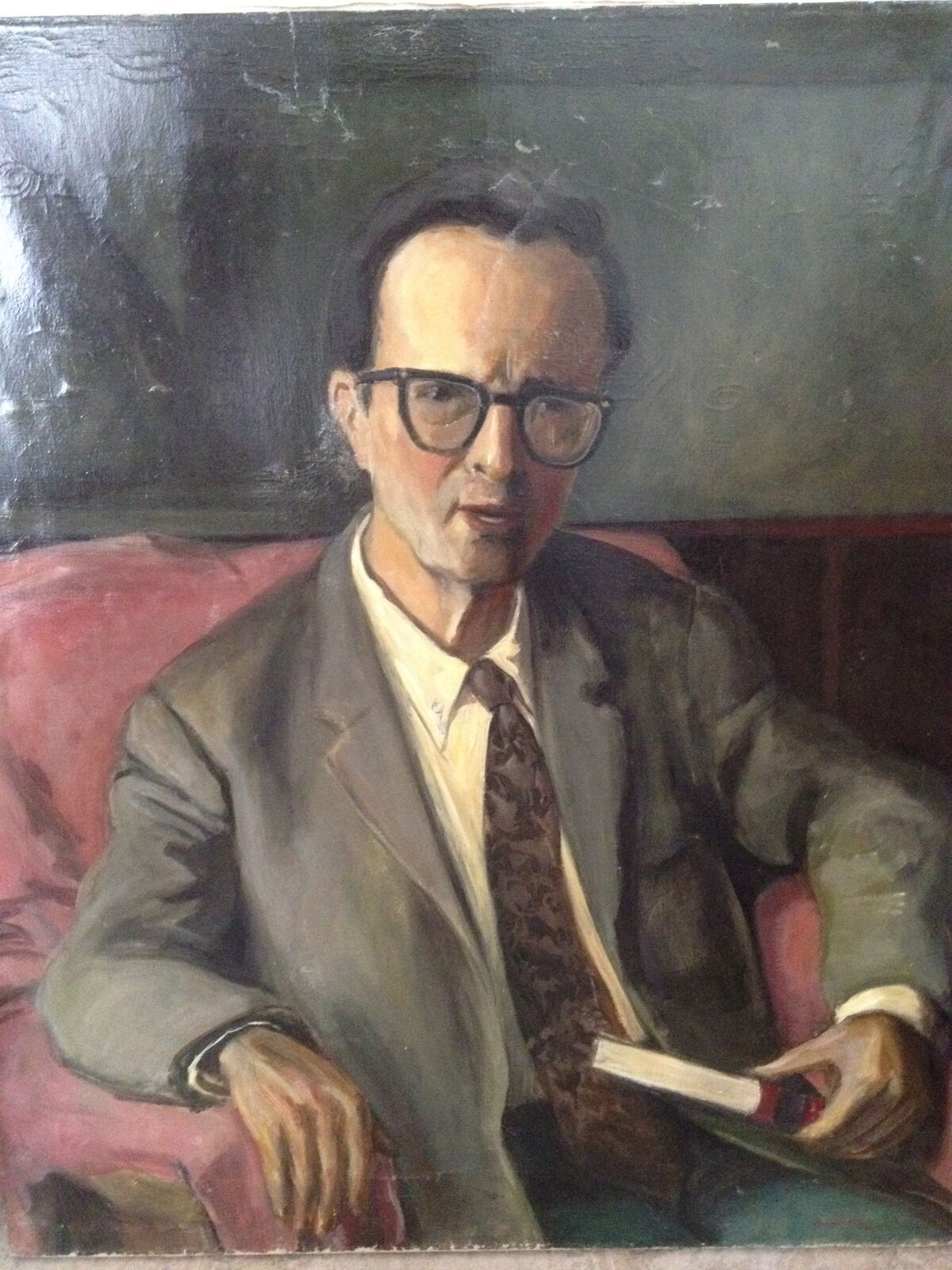 Earlier this week, I got this text message from my nephew:

Through the accumulation of certain facts, based on statements made by my grandfather, I believe the answer to this question is yes.

My grandpa used to work at the Franklin Institute. There, he said, they were using a computer “as large as a room”. He talked often about the numbers of women that were on hand to replace components, specifically vacuum tubes. He said himself that the purpose of this machine was to solve differential equations for use in firing solutions used by artillery.

The quoted sections below are taken from the book The Innovators by Walter Isaacson. 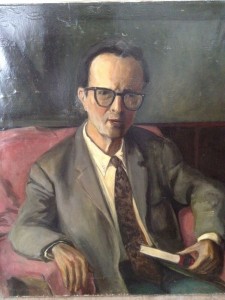 In 1941 the only machine that could be used for solving differential equations in bulk was called a Differential Analyzer. This machine didn’t work on its own. Its calculations had to be combined with he effort of room full of people, women mostly, with math majors. At this time the machines weren’t called computers. The women doing the number crunching were the computers. The ‘computers’ would complete equations by “punching the keys and cranking the handles of desktop adding machines. Even with all this effort, it took over a month to complete just one firing table.”

Why did the artillery need so much “computing” power? Isaacson goes on to say, “In order to be aimed properly, guns required tables that factored in hundreds of conditions, including temperature, humidity, wind speeds, altitude, and gunpowder varieties.” When these guns were being used all over the world, there were all sorts of variables to factor in.

In 1942 it was looking like some of America’s artillery would be rendered ineffective in the places it was being shipped. “Creating a table for just one category of shell shot by one gun might require calculating three thousand trajectories from a set of differential equations.” Even with all the effort of the “computers” it took more than a month to complete just one firing table.1

The machine at the Franklin Institute that grandpa worked on was not called a computer–at first. It was called a “high speed vacuum tube device for calculating.” This was to be the replacement to MIT’s Differential Analyzer. The machine that found its home at the Franklin Institute had a much sexier name, that might ring a bell for you: “Electronic Numerical Integrator and Computer” or ENIAC. So, the first bit of amazingness about old gramps was that he worked on the what is considered to be the world’s fist computer, ENIAC.

The reason I mention this is because in a number of books I’ve read, there is a distinct tie between those working on computing artillery firing solutions and ways for making those computations faster and, as it turns out, those that worked on The Bomb. The relationship is that in order for the the bomb to function properly a LOT of computation had to be figured, specifically when it came to the matter of “implosion”. This was the method by which the bomb was detonated.

Where the evidence builds, which directly ties grandpa to the Manhattan Project, centers around 3 stories grandpa told me. When I was in college at the Academy of the New Church located in Bryn Athyn, just outside of Philadelphia, PA I had time to spend with my grandfather. He had just retired from teaching physics and philosophy at the Academy. Over a two year period of time, the two of us would go out for breakfast on Sunday mornings. While he was a bit stuck in time, focusing much of his effort on researching the philosophical teachings of a 17th century scientist named Swedenborg, he shared with me some of the stuff that he did as a scientist.

So here it is. The three cases that I believe tie grandpa Allen to the Manhattan Project:

Case #1 for grandpa’s involvement in the Manhattan Project: Bleechers

He shared this story with me more than once.

He’d say, “We used to work in this lab, working on radioactive material.” Then he’d ask. “Do you know where that lab was?”

I’d reply, “No grandpa, where was that lab?”

“Under the god dam football bleachers at the University of Chicago!”

This sounded loony to me at the time. However, just a couple of years ago I was watching a documentary on the Manhattan Project. In that show they mentioned the lab “under the bleachers at the university of Chicago.” Today we read in Wikipedia:

“Chicago Pile-1 (CP-1) was the world’s first artificial nuclear reactor.[4][5] The construction of CP-1 was part of the Manhattan Project, and was carried out by the Metallurgical Laboratory at the University of Chicago. It was built under the west viewing stands of the original Stagg Field. The first man-made self-sustaining nuclear chain reaction was initiated in CP-1 on 2 December 1942, under the supervision of Enrico Fermi.”

Case #2 for grandpa’s involvement in the Manhattan Project: Implosion.

Grandpa told me on several occasions how he was involved in a project where they were trying to properly shape explosives around a hollow sphere. The charges would be fitted around the sphere “like the patches of a soccer ball”. The idea was that when detonated, the charges would force all of their power inward. We have come to learn that this was the exact method by which the atomic bomb was detonated. This was called “Implosion.” To get it work properly implosion came along with some very difficult calculations around how the shockwaves would act. A boat load of calculations had to be done. This is why people used to dealing with bulk equations, like the artillery people, and grandpa, were brought in. If those waves were not precisely accounted for, then the bomb would not detonate properly.

Case #3 for grandpa’s involvement in the Manhattan Project: Oppenheimer.

In our discussions grandpa would tell the story of being “in a movie theater”. It wasn’t a movie theater. It was actually a large room where he and other scientists gathered to watch films and receive lectures. He said “after the film was over, and the lights came on, I was surprised to find myself seated next to Robert Oppenheimer.” Gulp! This precisely puts grandpa in the same room with Oppenheimer, the “father of the atomic bomb.”

Given cases #1 and #2 above, #3 seals the deal for me. Grandpa had a hand with The Bomb. We are not sure just how involved he was. Now, the next logical question is, was he at Los Alamos? There is only one thing that grandpa told me that may constitute proof that he may have actually been at Los Alamos. I’m not sure we’ll ever really know this for sure. It’s possible his other work could have been done at other labs. At the time of our discussions I did not know enough about Los Alamos to ask this sort of probing question that might have given me better clues.

The tenuous bit of evidence that possibly links grandpa to Los Alamos takes us back to his comment about the “movie theater.” In the works of Richard Feynman, one of the first physicists to join the Manhattan Project at Los Alamos, he mentions that “the largest assembly hall in Los Alamos” was its…wait for it… movie theater. Perhaps it’s a reach. Certainly other labs had assembly halls used to show films. Perhaps not? But grandpa saying he’s in a movie theater with Oppenheimer? It sure as hell wasn’t at Mann’s Chinese Theater in Hollywood.

When you read about the level of security around Los Alamos, where the bomb was first built and tested, you get a sense of how extreme everything about it was. To work there (in the middle of nowhere) you would be conditioned not to talk about anything you were involved in unless it was with your own team. No one knew what was going on, not the wives, not the mothers, not friends. Anyone not “on the hill” as Los Alamos was referred to was, in the dark. All mail in and out was read by sensors. Telephone calls were ALL monitored by live operators listening in. If you were pulled over by a cop, your driver’s license would not show your name, or bare your signature. Instead there was merely a number for your name. No matter who you were, your mailing address would be PO Box 1663, Santa Fe, NM. That’s it. Surely this caused some consternation early on when the inevitable traffic violation happened. (Scientists and geeks are not really known for their following speed limits.)

Combine that unprecedented level of security with the burden each person at Los Alamos must have felt when the first bomb was dropped on Hiroshima, and you have the makings for a chapter in one’s lives they may find too painful to revisit. These feelings are echoed best in Oppenheimer’s words. “Now I have become death, the destroyer of worlds.”4

Grandpa never spoke specifically about being involved with the bomb. Then again, when I mentioned ENIAC to him he shrugged his shoulders. Certainly there is a big difference between those making history and those writing about it.