This technique solved my print problems on the Brother HL-L2340DW laser printer. However, I’m confident these steps have a good shot at working for any printer, on any computer.

Step away from the baseball bat.

One of the most frustrating experiences you can have with your computer is trying to get it to print something. We’ve come so far since the days of the serial cable and yet, every so often, we get into a jam with a printer that makes us want to hurt cute things. The age of the Wifi (wireless) printer has brought a whole new level of frustration to the mix.

The Brother HL-L2340DW is so frustrating. I’m sure even the calmest of Zen masters could be thrown into such a state of apoplexy they’d have no problems taking this printer out, and beating it like a baby harp seal. (Note, I do not condone the beating of baby harp seals). Our hats off to the movie Office Space for this cathartic scene. I’ve come dangerously close to just tossing this printer off the roof of my house. It’s sad how often dealing with technology can become a death match. Conquer or be conquered.

The problems that you run into with Wifi printers are maddening because they are intermittent.

Some mornings you get the thing working great. An hour later, your computer suffers some sort of amnesia and it tells you that it can’t find the printer. So you reboot your computer. Nothing. You reboot the printer. Nothing. You reboot your wifi network. Still nothing! You go so far as to delete and reinstall the print drivers. Nada.  Zilch. Nein. Al ist kaput. Just when you’re ready to pull out Babe Ruth’s War Club, a new page prints. You’ve won? Not so fast. Printers are just like Vegas slots. They give you just enough to keep you playing. You’re such a sucker! It’s time to, in the words of the Pace Picante salsa commercial, “get a rope.”

The following are common errors you might encounter with your Wifi printer:

When my printer makes me question my sanity, that’s when things get ugly. Finally after hours (and I do mean hours) of trying to resolve the intermittent printing problems with my laser printer, I hit upon a solution. 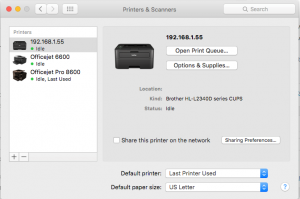 That’s all you need to do. So far my printer has actually been working a little faster using this more direct IP technique than it did by choosing its name. If you are having the same sort of problems, drop us a line and let us know if you have come up with another fix. We’d love to hear from you.