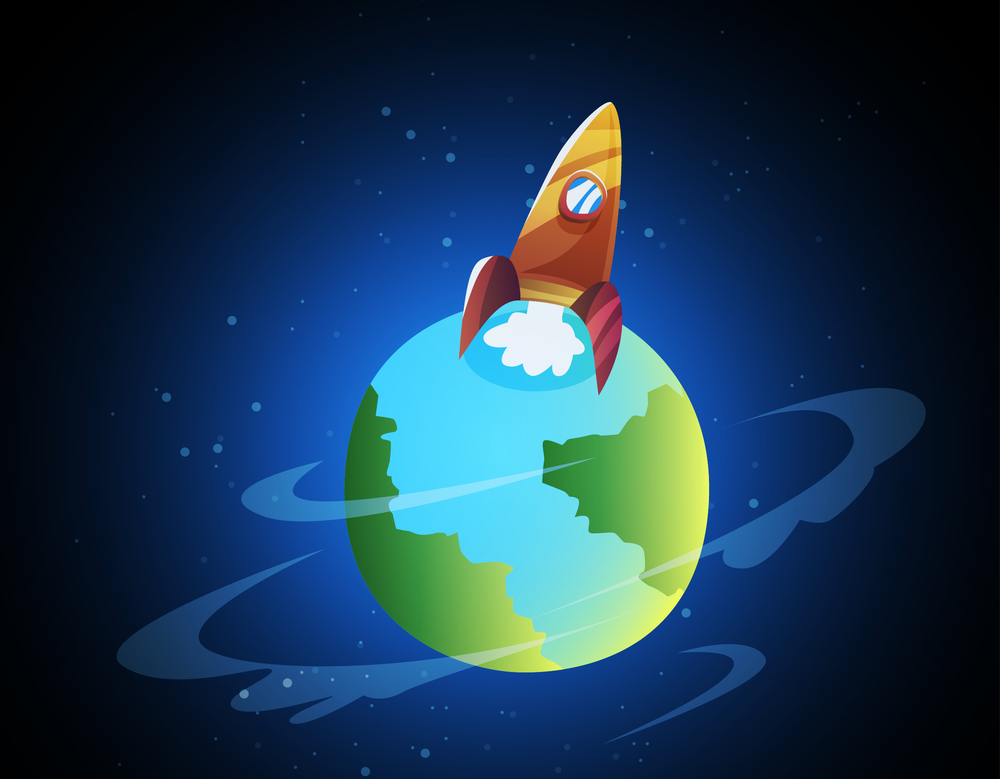 Every once in a while you just need a game fix. But, we’re grown-ups. We don’t play games. We, (um, cough cough) interact with our devices in an entertaining way so as to enrich our lives and the lives of those around us. Yup. We play games. But we don’t want to LOOK like we’re playing games. Candy Crush, I spit on you, phooey! I mean, we do have standards. Am I right people?

The challenge for us Gen X-ers is FINDING age-appropriate games amongst all the irrelevant junk that’s in the App Store. What we need is visual and mental stimulation that’s well beyond Flappy Bird, Smashy Car or, My Little Pony Rainbow, blah blah blah.

Over the years I’ve written other articles about iOS games. You can see them here, here and here. Recently a commenter on my blog asked me for an update. When I scanned through my iPad, I realized I did indeed have a fresh new list of age-appropriate titles. These are the games I’ve been enjoying over the past year. Hat tip to Karen E. for bringing up the question.

Prepare to have hours of your life drained away with these incredible time vacuums. 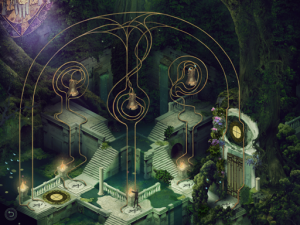 This game is beautiful. The world you enter is mysterious and atmospheric, that’s the description you’ll see on iTunes, and it’s true. Engaging and unique. The way you move your character was baffling to me at first. I admit at times I thought the game was broken or had crashed. By ringing bells, and turning on / off lights, repositioning giant blocks, you guide the tiny man in a suit through the game’s multitude of puzzling levels. This game is a feast for the eyes and ears. Great one to play while you’re sitting in a chair in the sky. The soothing background music is very nice. Pavilion is different than most games I’ve played. I’m taken by its masterful uniqueness. 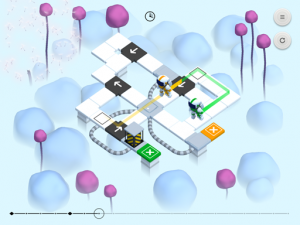 Prepare to have your noodle cooked on this one. In fact, the concept here is so out there I wasn’t exactly sure how to explain this game. If you could play with time, going backward and forwards, cause and effect, you might have something like what this game has achieved. The objective here is to get your character(s) to their appropriate colored tiles. Sounds simple right? No. You have to design their path, then step-by-step you bring them forward. Move your finger down along the right-side of the screen, to advance time. Drag your finger in the opposite direction, and you rewind time. At first, this seems fairly straight forward; then Loju throws additional actors on the board. Solutions become more and more difficult to architect. Oh, it hurts so good. 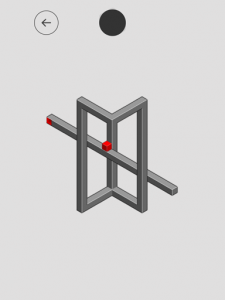 Here’s another puzzler that’s deceptively simple. Put the red, metal cube into the red box. That’s all fine as long as your brain can handle the violations to the rules of 2D and 3D illustration. Solving this game is about traveling along lines you see, not what your brain tells you is possible or not. I’m sure there are some researchers out there that use this game to evaluate the emotional intelligence of their students. 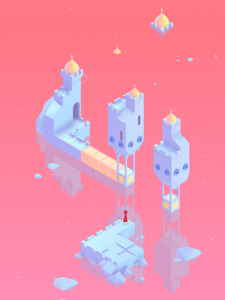 Finally, the continuation to Monument Valley 1 we’ve all been waiting for. This is a perfect iOS game. I’m so sad when I’ve solved all the levels, and there are no more. It’s like the perfect meal that you want never to end. MV2 does not disappoint.  This time, Princess Ida’s daughter comes along for the ride, which adds another dimension to solving the mystical puzzle boxes when both of you need to seek out exits. If you haven’t played MV1 or MV2 yet, stop reading this post, and get in there.

Path to Luma By By NRG Energy, Inc. 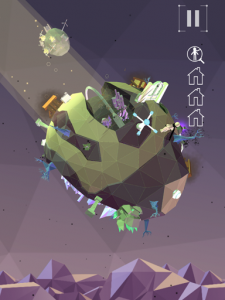 In the opening of the game, huge words appear that read, “The power to change worlds lies in your hands.” and  “Discover a path to a cleaner future.” In the tutorial, you are introduced to solar spears, polluted dwellings, solar panels, wind turbines and more. Are you starting to get the drift? When I first played this, I was reminded of The Little Prince, standing on his tiny asteroid, raking out his volcanoes. Solving puzzles means you get all the “clean energy” systems on a planet up and running. Moving items from one side of the planet to the other, rotating the planet so your solar panels are in the sun, even twisting wind turbines so they pick up the wind, not to mention picking up the smelly trash, can all be very intricate, but makes for a fun game where you feel like you’re accomplishing something. I have to hand it to NRG Energy for putting this together. Are you playing a big advertisement for the company? It sure doesn’t feel that way. Do I feel good about NRG because of this game? Yes. Hours of fun. Tough to put this one down. It’s like fun with gizmos.

Love You to Bits By Alike Studio 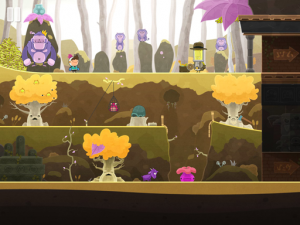 Perhaps this one is at the lower end of the “grown-up-ness” scale, but it’s so good, I don’t care who sees me playing it. (I had this same reaction to LEGO Harry Potter, which I wrote about here.) This is a side-sliding game where you navigate your character through a series of different planets as he seeks to find the pieces of his robot love who was blown up. 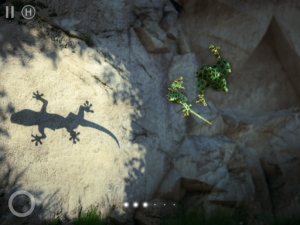 The concept behind Shadowmatic is like those shadow puppets you used to play with on your bedroom walls. The whole thing revolves around you orienting objects so that the shadows they cast appear like the shape you were shown. A sleigh, a dog, a frog, and more. The closer you get to being correct, the more little lights appear at the bottom of the screen. You’re getting hotter, hotter. No, now colder, colder. This game can get frustrating as you dial in the image and get close, but not close enough. Some levels can be maddening. Keep with it. The lizard’s the least of your worries! 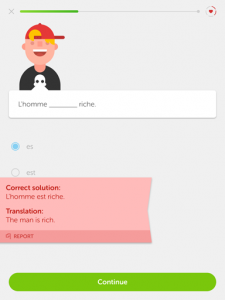 Technically this isn’t a game but a fun way to learn a new language. The idea here is that instead of spending your downtime checking your Facebook or Snapchatting your face to your friends, you might repurpose your brain cycles to improving yourself. I know, it’s a tall order. However, Duolingo makes learning on you iPhone or iPad fun. I’m sure you could spend 2000 words doing a side-by-side comparison of language learning apps. But so far, I’ve gotten further on this one than any other, including Rosetta Stone. Am I learning French? Parlez-vous anglais? 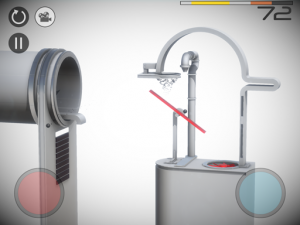 Warning. This game might get you to press the screen so hard you might break the glass. An addicting gravity game where you have to use flippers to bounce balls through various obstacles. Visually, the game felt fresh. Stark white, with the various obstacles rendered in 3D. Within the 60 levels, you have to work out the mechanical functions of flippers, fans, funnels, and fulcrums that will result in success.

Words With Friends By Zynga Inc. 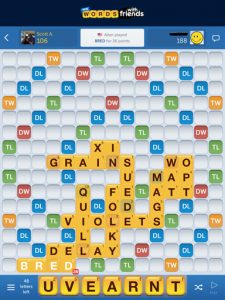 I felt compelled to add this game to the lineup simply because this is the one game I play the most. I’ve run into people (here and there) that are addicted to WWF, and now that I’m playing, I know why. It is addicting. (in a healthy way). If any one of the people I’m currently playing against dropped out or didn’t Rematch, I might actually feel a real sense of loss or hurt. What’s nice about this Scrabble knockoff is that you can play with others, at your own pace, which makes Words With Friends super social. Of course playing against the computer is an option too, but there is something truly satisfying about slamming your next-door neighbor with a 30 point 2-tile play. Booya! Yes, yes, this is a screenshot of a current game I’m in. I’m getting my arse handed to me–for the moment. 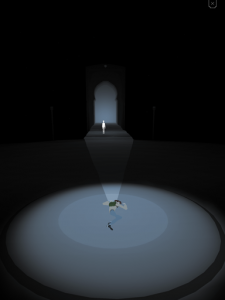 While the actual length of this game is pretty short, its interactive gameplay was so fascinating, I found myself losing track of time in Lost Tracks. This is the only game in this roundup where I recommend you play when you are alone. First of all, you navigate your character by tilting the iPad left or right. Then by pressing your thumb on the glass, the character will walk or run forward in the direction you are “steering” him. You must wear headphones when playing. The game mentions this at the beginning, which I promptly ignored, and then got stuck because in one scene, somewhere off in the distance I could hear a telephone ringing. But without headphones, I couldn’t tell from which direction the sound was coming from. A fascinating use of game acoustics. On another puzzle, you actually have to speak out loud. The character stands before a microphone. You have to figure out what to say. I could tell you, but you know… then you’d hate me for spoiling the fun of discovery. You look and act a little nutty when playing the game. I wonder if the makers will be producing a version that’s compatible with VR goggles in the future? It felt very much like that’s where this one is heading.

Have an iOS game you like to play? We’d love to hear about it. Add your thoughts in the comments below. Game on my friends.